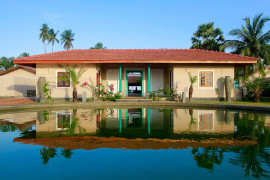 Set on the beach this unpretentious but lovely resort is a fabulous base whilst in this area. The resort offers top facilities such as a large swimming pool with jacuzzi, private plunge pools for the Tropical Villas, a large bar and restaurant, free WiFi and much more. ﻿ 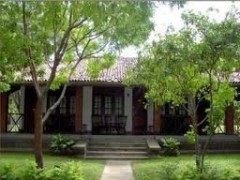 The hotel is situated on a 50 acre plot of land that was originally used for Chena cultivation(an ancient method of land rotation). The land was devoid of trees and completely abandoned at the time of purchase on the early 1990's. Now trees of many species and varieties are found on the premises creating an atmosphere of cool tranquillity. Varieties of mango have been introduced to start a mango orchard while other varieties of fruit - bearing trees have been scattered throughout the hotel premises to attract birds and wildlife. An ancient irrigation tank, Located at the edge of the property, has been renovated by the hotel, with the approval of the government, enabling villagers to obtain scare water during time of drought. The tank attracts large varieties of birds, elephants and other wildlife, which has made a trek to the tank at dusk an enchanting experience for the guests. Bird watchers and nature lovers can spend their time exploring. This hotel features a pool, a bar, restaurant, gym, games room and its very own chapel...well equipped to say the least. There is also an Ayurveda spa specialising in traditional treatments. 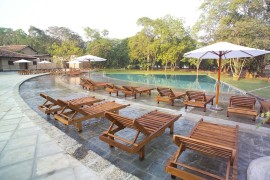 Chaaya Village Habarana lies sprawled across 27 acres of luxurious land bordering a stunning lake. Habarana is situated 176 km from Colombo in the heart of Sri Lanka's cultural triangle and is part of the Anuradhapura District.In this natural habitat it is easy to spot the permanent residents. Encounters with butterflies, birds, lizards, squirrels, monkeys and all other precious life forms found within the Habarana Village will delight you. A chat with the resident Naturalist can be enlightening. The very location of Chaaya Village makes it a biodiversity hotspot that attracts nature and adventure enthusiasts from around the world. The forever-sunny weather often beckons guests outside on to the terrace by the unique Infinity Swimming pool where they enjoy romantic dinners or sip cocktails seated ankle deep in water. Hidden away in one secluded corner of the property are the badminton, tennis and volleyball courts. Closer to the lake with a view of the pool is the cricket pitch. Any one of these games can leave a guest wanting to visit the Aryuveda Health Centre for a natural treatment that will rejuvenate body and spirit.

Serene Grand with its unique layout and well appointed accommodation captures the essence of this enchanting hill paradise and is guaranteed to provide a fascinating experience to its occupants.  It boasts light and airy rooms decorated in rich tones that are refreshingly comfortable and delightfully relaxing. The aura and ambience of the restaurant area which allows an excellent scenic view is also connected with unlimited Wi-Fi and is subtlety designed to prepare you for a gourmet’s delight. A well equipped Liquor Bar will provide you both variety and quality; the best of local as well as imported wines are to be found on the list. ﻿

Plantation Hotel is placed in a unique setting where the academy award film 'The Bridge On The River Kwai' was filmed. The hotel is on the banks of the Kelani River. Rooms at Plantation are well equipped, spotlessly clean and comfortable. Guests can rent bicycles to explore the area at leisure. Numerous varieties of Banana together with other fruits and vegetable are grown in the sleepy village of Kitulgala. The restaurants and Hotels at Kitulgala are famous for traditional Sinhalese rice and curry supplemented by the dessert of curd sweetened with Kitul palm honey making this area a pleasure to explore at a leisurely pace.﻿ 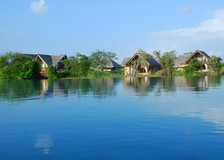 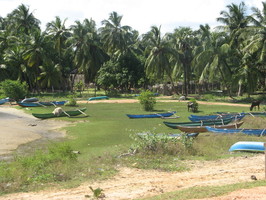